Keurig vs Tassimo: Which Coffee Machine is Best?

With the rise in popularity of single serve coffee makers, there’s been two brands that have stood out as the most popular: Keurig and Tassimo. Here we’re going to pit one machine against each other to see which machine is, overall, a better value. Taking into account the simplicity of using the machine, the quality of coffee, and wide selection of coffees available, we will see which coffee machine wins this battle of single serve coffee machines.
For this side by side comparison, we’re going to compare the two most popular models for each company: the Keurig B-60 K-Cup Brewer (priced at $129.99) and the Tassimo T45 Single Serve Coffee Maker (priced at $149). 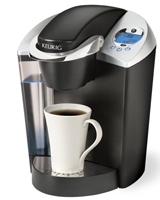 Keurig is wholly owned by the Green Mountain Coffee Roasters company. The Keurig brewers were created all the way back in 1990 as a way to create single serve coffee for office environments. Over the years the Green Mountain Coffee Roasters company invested more and more in the Keurig brand until they bought it outright in 2003. Although Keurig’s initial focus was on drip coffee, it has expanded their patented K-Cup line of beverages to include hot chocolate, cider, and even lemonade! Keurig has continued its dominance of the ‘office coffee’ market (if you work in an office there’s a good chance your current coffee machine is a Keurig brewer. Keurig has grown to a $1.7 billion/year business.

Major coffee companies that produce K-cup versions of their coffee: 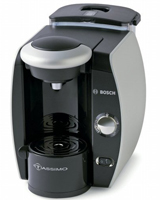 The first Tassimo machines hit the shelves in France in 2004 and have rapidly expanded worldwide. The company is owned by Kraft Foods, and the machines themselves are built by Bosch. Whereas Keurig has focused on single-serve drip coffee, Tassimo machines have instead focused on espresso beverages like lattes, cappucinos, and other beverages that include milk. They accomplish this by having barcodes on the T-discs (which are Tassimo’s answer to K-cups) that instruct how much water, brewing time and temperature to use for each cup. A popular misconception is that Tassimo T-discs use powdered milk in their T-discs. Instead they use UHT (ultra high temperature) milk, which is a kind of ultra-pasteurization technique.

Major coffee companies that produce T-Disc versions of their coffee:

For many of you this is the only factor that matters: does the coffee taste good? That wholly depends on what kind of coffee you intend on making. If you only drink drip coffee, or tea, then a Keurig Brewer will have a wider selection of coffees to try (although they tend to be slightly more expensive than T-discs). If you would like to have a latte or any other espresso based beverage in the morning at the push of a button, then a Tassimo coffee maker is the ideal choice.

For the Keurig brewer I tried Starbucks’Cafe Verona K-cups. Of the Starbucks’ coffees, Verona is by far my favorite. It’s smooth and has subtle cocoa notes (I have a weakness for chocolate). The K-cup version of the coffee managed to be quite tasty. I would say that it’s not as flavorful as purchasing it fresh from a Starbucks cafe (when they have it), but it tasted better than when I brew it in my regular drip brewer.

By the way, if you try out Verona, pair it with a chocolate snack of some kind. You won’t regret it!

For Tassimo I tried out Tim Horton’s Medium Roast coffee ($16.49 at Amazon.com). I wanted to compare drip coffees head to head. (Starbucks stopped making T-discs in favor of pods for their new Verismo coffee makers) Tim Hortons is a different kind of coffee compared to Starbucks: it’s roasted much lighter and has less caffeine. I was actually pleasantly surprised by the flavor of the T-disc produced coffee. It only produces 8oz. per cup, so I used two to fill my large mug. But it was very smooth, and overall I thought it was a little better than getting it straight from a Tim Hortons’ restaurant. However, you do have to add your own cream and sweetener. 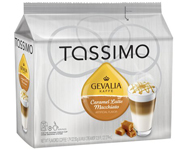 For the milk-based beverages I also tried out Gevalia’s Caramel Latte Macchiato ($12.50 at Amazon.com). I have a sweet tooth so Caramel Macchiato’s tend to be my espresso beverage of choice. I wasn’t sure how the coffee maker would handle a complex beverage like the Macchiato, but it handled it quite well. You start by inserting the milk creamer T-disc, and then when the orange ‘stand-by’ light turns on, you replace the milk creamer T-disc with the flavored espresso T-disc (which holds the caramel flavor). The whole thing took less than 45 seconds by my watch, and the drink was delicious: it wasn’t too sweet (my main concern), and the milk was surprisingly high quality. Not as good as freshly-frothed milk from a cafe, but considerably better than some Nespresso milk-beverages that had a distinct powdery taste to them. I do miss the caramel syrup pattern on the top, however I could just add that myself!

The Tassimo T-45 comes with a 61oz tank, which means you need to refill it every 5 cups or so. It does come with its own water filtration system so can use tap water to fill up the machine (which is convenient). The drink tray is completely removable, so if you want to brew directly into a travel mug it’s no problem at all (it also makes for easier cleaning). If you want to brew a french press, you can use the hot water function on the Tassimo brewer as a kettle replacement.
The best feature of Tassimo coffee makers is the barcode-specific instructions to create custom beverages. But it’s also the downside in that there’s no flexibility. If you wanted to have a larger latte, for example, then you’re only options are to use two T-discs and make a beverage twice as big.

Keurig has a slightly larger 62oz tank, however its position at the side of the coffee maker means that it takes up more counter space overall. It also has a removable drip tray for brewing directly into a travel mug. But Keurig’s main strength overall is its flexibiliy: you can choose you coffee size to be 4,6,8,10 or 12oz., which is great if you’re making beverages for a large group with varied interests. It also a wider selection of K-cup coffee options available. It’s disadvantage is that it can’t brew any milk-based beverages (unless you spring for the Keurig Vue Coffee Makers). You can also get a reusable K-cup filter that enables you to brew any kind of coffee you like in your Keurig brewer, which is something that Tassimo can’t do.

Because I like the flexibility in being able to have either a drip coffee or a caramel macchiato (when I want to treat myself), I ultimately went for the Tassimo T45. There isn’t much flexibility in the types of beverages it makes, but in the end I will trade that away for convenience any time. The less decisions I need to make while making coffee in the morning, the better!

Shop for the Keurig B-60 K-Cup Brewer here:

Feel free to visit the Kona Coffee Shop for more Single-Serve Coffee Makers as well as tons of Kona Coffee in K-cups and Pods!